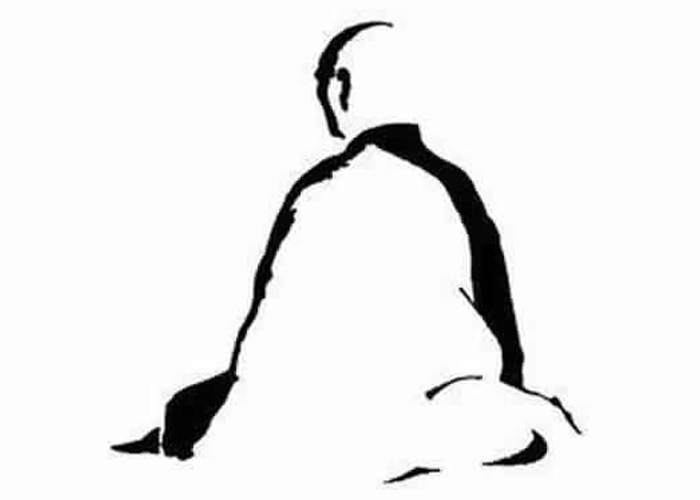 Karate-Do training encompasses six levels of mental development; these concepts are rooted in the practice of Zazen and are extremely powerful methods of strengthening ones mind. Below are some brief descriptions and contexts relating to the practice of Karate.

Mushotoku – A state of mind where one does not train to seek anything tangible or intangible. We often do something to get something in return e.g. a course to ascertain skill, grade or a certificate. In Mushotoku a Karateka must train to disassociate itself from any attachments or reward. Although the Karate belt system provides a great framework for Karateka to learn their syllabus, it can become the only motivation towards training. The problem with this kind of thinking is that learning becomes limited from the outset.

Mushotoku is this state of mind in which you act without wanting to achieve a result, and give without wanting something back. This attitude characterises the very heart of the “way” of Karate. Ultimately, letting go of the inner-self with a view to finding something new within you. This process of transformation of the self can only happen with persistent and regular training.

Next time you put on your Gi; tell yourself that your goal is to understand yourself rather to walk away with something with some kind of attainment.

Hishiryo – Consciousness and the state of mind during Karate training cannot be the same as it is in daily routine. Hishiryo is a state of mind that does not behave like the intellect. When we are training, thoughts, ideas and distractions come and go. This concept of letting these thoughts process freely without following them is known as Hishiryo consciousness. The idea of not thinking and having a peaceful intellect can seem strange of even contradictory. However, this state of mind is an absolute must for all Karateka.

The pursuit of constant thinking is not a normal or natural state of the mind. This is because the imagination and personal desires are constantly swaying the mind from simplicity and peace. The zen masters say that this peaceful state of mind is the original condition of the mind and that is what we must pursue in our training.

When we are training we tend to over think moves or drills. Subsequently, leading to a myriad of conflicts and battles within the mind, preventing us from finding the true essence of the movement. In Karate, it is important to accept the movements for what they are and not everything requires deep thinking or explanation.

The concept of Zanshin is prevalent in Martial Arts and the study of Zen. It is about achieving a state of mind where one has total awareness of surroundings and being fully vigilant of the here and now. Zanshin demands complete stillness of the mind without being attached to any preconceived or distractive thought. It requires one to submit themselves to the present moment unconditionally.

Zanshin requires one to be fully engaged with their activity and to be mindful of distractions. This mode of thinking requires the individual to be fully immersed in the task at hand and ensure it is completed with focus and attention to detail.

The study of Zanshin and its context in the practice of Karate is fundamental. This level of mind state helps the Karateka to develop their listening energy by practicing meditation and focal breathing. Through regular Kata, Kihon and Kumite practice one can develop a heightened sense of alertness and sensitivity. This helps the Karateka to react to fight-or-flight situations in a calmer way.

In time, this practice starts to influence daily routine such as going to school/work, having breakfast or preparing for a journey. Ultimately, the higher goal of Zanshin is to realise that every moment is a special moment and nothing is ordinary!

Fudoshin is often referred to as a state of equanimity – a psychological state of stability and composure that is undisturbed by any event that may evoke stressful emotions, pain or similar phenomena that may result in one to lose balance.

Fudōshin literally means “immovable mind”. This state is often associated with the more experienced Martial Artists. The Samurai valued Fudōshin so much that it became an essential mental dimension of their Martial Arts training. It has been said that a mature Samurai is one who displays qualities of Fudōshin.

Many of the advance Karate Kata have great emphasis on Fudōshin through the practice of stances and the names that the masters chose for their Katas. The stances and the names provide an insight into the feeling and emotion required to practice these Katas. Below are some examples of advance Kata/Stances:
1. Fudō-dachi (不動立, unshakable stance) also called Sōchin-dachi (壯鎭立) after kata Sōchin.
2. Sanchin dachi (三戦立ち) “sanchin stance” named after GoJu Ryu Kata called Sanchin or Three Battles.
3. Seienchin is another Goju Ryu Kata emphasising on pulling and remaining calm before a battle.
4. Hangetsu (半月) (Japanese: “Half Moon”) is an advanced kata practiced in Shotokan with similarities to Sanchin.

All of these Kata and stances they represent require Fudōshin which can only be acquired through daily practice and hard work.

Fudōshin represents a peaceful state of mind that is totally determined and is strong willed. It is level of attainment that that cannot be disturbed by confusion, hesitation, doubt, or fear. This concept can be life changing and is ever required for our modern age where there are too many examples of violence and lack of control.

Mushin literally means the “mind without mind”, or often referred to as “No-mind”.

Mushin is a state of mind where one is not fixated or occupied by any thought, distraction or emotion. When this is achieved then one can consider themselves in a state of Mushin or interconnected with the universe. In this state impulses and any impetuous reactions have no place. There can be no ego or intentions towards oneself. Mushin a pure state of mind where there is clarity of thought and presence of being.

A Mushin mind is not an empty like a cup, however, it is fully present and aware. Mushin is like the still muddy water that has settled after the heavy rain. This water is clear as the mud has settled and the reflections of the water can be seen as the sun shines across the surface.

Mushin in Karate can take years to develop and often many Karateka do not practice long enough to experience this state of mind. A simple self check of Mushin can be conducted safely within your Dojo. Ask your fellow Karateka to attack you randomly and get them to observe your reactions…

This state of mind MUST be FREE from any emotions that resembles anger, fear, judgment or the ego during training.

Satori is the awakened mind or the state of enlightenment. It can be described as a sudden flash of insight into consciousness or a complete content and understanding of something. Satori is not something that can be understood but only experienced.

This state of mind is often mistaken as something special or the ultimate goal of a given training practice. On the contrary, Satori is simply returning the mind to its original state to the point of inception. A good example of Satori are animals; they are sentient beings who are totally immersed in their surroundings with no complexity or thought other than the present moment. They always live within their original state.

Experiencing Satori has become a thing of the past because it is not something that can be attained without loss or investment in training. Satori will only happen when you train with good postures and be totally surrendered to the present moment. It is my belief that we sometimes experience Satori but are often not aware of it as our lives have become too complicated.

In Karate, when students begin their journey they are white belts implying that they have no knowledge of Karate. Maintaining this simple and empty mind is the challenge for all Yudansha once time has passed and many Kata or drills have been learnt. The idea of Satori reminds all Karateka that there was once an original state of being before one achieved a mature status.

To experience true Satori one must practice standing in stillness without no fear or emotion on a regular basis.