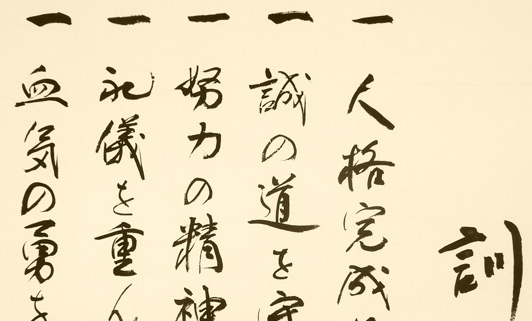 Dojo Kun is the “Code of ethic” for the KaraTe-ka, it embodies or contains the qualities that each individual should be striving for through their physical efforts of KaraTe training. These rules date back as far as 12th century feudal Japan. During this era the Samurai class followed a similar code known as Bushido (way of the warrior) which was based on honour and social behaviour. Today’s guiding principles are considered to be a modern take on Bushido with some influences from Zen philosophy. 18th Century Okinawan Master Tode Sakugawa is considered to be the founder of Dojo Kun. However, Gichin Funakoshi Hanshi was primarily responsible for popularising these rules through Shotokan KaraTe – Dō.

One! To Strive For the Perfection of Character

One! To Defend the Paths of Truth

One! To Foster the Spirit of Effort

One! To Honour the Principles of Etiquette

One! To Guard against Impetuous Courage

The Dojo Kun is normally recited at the end of each training session as a verbal affirmation to KaraTe – Dō. It has a fundamental influence towards the development of mental and spiritual growth of the KaraTe-ka. This ethical code creates the bridge between the Dojo and personal life.

Character – One! To Strive For the Perfection of Character

Character building is synonymous with physical KaraTe training. All beginners, especially the young are taught the importance of character building through discipline, rigorous training and perfecting techniques through repetition. The spirit to fight is achieved as one gains more confidence through development of stronger techniques. Over time the KaraTe-ka learns to harness their spirit through training. Subsequently allowing them to fight with the animal instinct as well as overcome personal problems especially in times of sickness, domestic crisis or work/business related issues. These spiritual values are developed throughout the life time of the KaraTe-ka, however, once the concept is understood and used on practical level, it will provide a lifetime benefit of inner strength and peace.

Loyalty – One! To Defend the Paths of Truth

The paths of truth within KaraTe relate to the strong Samurai traditions of being faithful and loyal. This faith is to KaraTe, your Sensei and to the Dojo. The student must always be faithful to their Teacher and follow in much the same way as a medieval Samurai was bound to follow his feudal lord to battle without hesitation. Whilst this may seem inappropriate in the present day, this concept is the basis of how the bond between Sensei and student is developed thereby encouraging a learning environment ideal for KaraTe. The student must prove his/her loyalty over the years. The faith and loyalty extended to the Sensei is often rewarded in the form of knowledge and wisdom.

Effort – One! To Foster the Spirit of Effort

To foster spirit and effort during training is about having dedication and commitment towards achieving mastery of the art. In no case is mastery possible without strenuous effort and sacrifice on the part of the KaraTe-ka. This endeavour must be of a sincere nature and not just superficial. Serious effort on the part of the student will be recognised by the Sensei who will in turn dedicate more time and energy in teaching the student.

Etiquette – One! To Honour the Principles of Etiquette

Respect for others is an important part of the Budo (martial arts) culture as well as a common quality indigenous to many cultures. One of the most fundamental principles of KaraTe – Dō relates to etiquette: “Karate begins and ends with courtesy”. This courtesy is often reflected in a form of Rei (bow) which encourages humility and peaceful training amongst the KaraTe-ka. Budo traditions date back to the Samurai era and have become an essential aspect of all martial arts.

Control – One! To Guard against Impetuous Courage

A trained KaraT-ka is a person with fierce spirit and great strength, this empowerment comes along with responsibility. Misuse of this skill and knowledge is strictly forbidden within the KaraTe community. All KaraTe-ka must foster their spirit and use their knowledge wisely only for the sake of justice or protection of their family and friends. A student that has accomplished great character can walk away from a fight or any form of confrontation; this is due to the control and discipline that has been harnessed through years of practise. A true KaraTe-ka does not need to test his/her abilities on anyone and is not easily provoked. Peace, harmony and character are the highest goals of KaraTe – Dō.