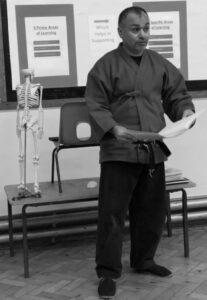 Azeem found and setup EmptyHand KaraTe School in March 2006. He is the Head Teacher (Sensei) at EmptyHands and is responsible for the teaching structure, syllabus, KaraTe coaching and mentoring for students and Assistant Instructors.

Azeem developed a keen interest in the fighting arts as a child with a family background in wrestling. He found Martial Arts in his teens with a great interest in kick boxing. In 1994 he began his KaraTe journey with the Poon Dojo where he became a senior teacher after years of dedication. Over the years he also followed and studied the work of various Karate Masters including the late Hirokazu Kanazawa Sōke, Chris Rowen Shihan, Yoshinobu Ohta Sensei and Nobuaki Kanazawa Kanchō.

In 1999, Azeem began his study in the internal arts with Master John Ding (International Academy of Tai Chi Chuan). He trained under the guidance of Sifu until 2005 and in 2014 returned to the academy to resume his training.

As a result of recognising the impact of internal martial arts, in September 2000 he joined the British School of Shiatsu-Do in London and graduated with a practitioners Diploma in 2003. Today, Azeem continues his research in his private clinic in Epping (Essex) as a fellowship member of the Shiatsu Society under the guidance and support of Rex Lassale (Shiatsu Master).

In 2013 he completed an M.A in Coaching at the Oxford Brookes University where he pioneered the first ever Karate Coaching Model through a research study. Currently he is working towards raising awareness in Karate for coaching through lectures, articles and publications.

Azeem continues his research by collaborating with various established groups in order to keep up-to-date with the latest work within Karate-Dô. In recent years he has been working on the refinement of Shodan, Nidan & Sandan syllabus to better align them with the demands of the modern Karate-ka. He has also developed a new Dojo Kata (Ensō) that was derived from 15 years of research. Currently, Azeem is working on a new applied Karate syllabus and developing online Karate learning through Microsoft Teams.

Azeem has an extensive academic background in Business Architecture & IT Transformation; he is a freelance Senior Business Consultant (Bespoke Vista Ltd) and has been working for various large organisations for the last 20 years. Through his profession (MoD & MET Police), he has held security clearances and is currently eCRB checked.